In the course of one of many conversations Dad had with his Child Find caseworker, he stated that he felt he would be soon keeping his promise to put his daughter on the phone to say hello after their five-year struggle to be together. All signs indicated that decisions made by the child’s home state family court and interstate child protective placement would support reunification. But a few months after publishing our report, Dad called with the discouraging news that, although child welfare workers had expressed that placement with him would be in the child’s best interest, the court was holding off on a decision pending further evaluation.

Once again, Dad had driven ten hours for a court date only to learn that they were holding off. To make matters worse, a child welfare worker told him that his daughter was in a very tough position. The child – who had been placed in foster care due to her mother’s negligence – had confided to the worker that her mom told her to deny that she wanted to live with her father. More worried than ever, Dad faced a long drive home without his daughter beside him.

Child Find continued providing Dad with support and information on navigating systems. About a week into this latest round, Dad called from the courthouse parking lot and asked his caseworker to hold on. Then he handed the phone to his daughter. After exchanging greetings, the caseworker noted, “Your dad is crazy about you.” “I know,” was the sheepish reply. Then she said she was excited to be on her way to live with her dad and was impressed that he had been working with Child Find for the past five years.

Meanwhile, the casework continued. Dad expressed concern over what the judge had said the order would last for two years, but he would need to return in three months. Child Find went over the order with Dad, clarifying its implications and his rights. Still, he remained anxious about what might happen, particularly due to the difficult history regarding Mom.

Dad shared that he was disturbed by things his daughter had related to him while under Mom’s care and while in the foster home. He learned that she had spent time living in a car. When removed from that situation to a foster home, she was forced to sleep in a dirty room full of cats and litter boxes. He was also concerned that now that their daughter was living with him, Mom was calling and upsetting the girl, first telling her she didn’t want to see her again until she was 18, then demanding the return of the child’s violin. The very next day she phoned to say she loved her, and wish her a wonderful day at school. After these calls – and similar ones from her grandmother – the girl would cry and tell Dad how angry she was. Dad asked his caseworker if he was required to allow contact between mother and daughter. He believed there was a no contact order but was worried about how to handle enforcing it. His caseworker told him how to find that answer, and discussed following up with a mental health professional for his daughter to begin the healing process.

Dad engaged in the follow-up his caseworker had recommended, and continued contact with frequent coaching sessions on the parenting skills necessary for raising an adolescent girl. Dad’s lack of experience was more than made up for by his eagerness and open mindedness. First order of business was a series of father and daughter shopping expeditions to provide her with some of the necessities she had never been given. An eye exam was scheduled, and her first pair of glasses was purchased. She was outfitted with new clothes that fit properly, and new shoes to replace her brother’s hand-me-downs. As a special treat, Dad surprised her with an iPod.

Safe, settled, and optimistic, Dad loves preparing wholesome home-cooked meals, while Daughter – after spending years of making her own ramen or boxed macaroni and cheese – declares she will happily eat anything he makes…as long as it’s NOT macaroni and cheese. 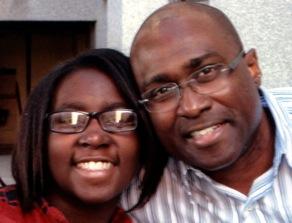