Child Find case workers assist families whose issues can be further complicated by falling under the jurisdiction of Native American tribal courts. While tribal courts enjoy a great amount of freedom in deciding minor criminal matters and civil disputes according to their own individual tribal customs and traditions, in general they tend to follow laws and procedures not so different from those of state and federal courts in the U.S.  Most use the adversarial system familiar to state and federal courts, and they are bound by the Indian Civil Rights Act, which guarantees many of the same due process protections as the Bill of Rights.

Some tribes use the same laws as apply in state court for domestic relations cases, while others use more of tribal custom law, which is not always codified.  One example of the difference is that many tribal courts consider placing children with extended family such as grandparents, while state courts rarely consider placement of a child with a non-parent.[1]  Another general difference is that tribal justice systems have grown out of a tradition of consensus-building rather than one of courtroom adjudication.  What this means in practice is that tribal courts often allow more consideration of the right of various persons to be heard, particular the elderly, and may give these witnesses more scope to state their views than would be allowed in state or federal courts.[2]

One of the most significant issues for tribal courts is their jurisdiction, and how it intersects with that of state and federal courts.  Tribal courts derive their jurisdiction rights from tribal sovereignty—the right of tribes to govern their own affairs—which can only be abridged by acts of Congress.  But tribal sovereignty is not just a matter of the territorial boundaries of what’s known as “Indian country”, but is also linked with tribal subject matter and tribal membership among the parties to a dispute.  Tribal courts have exclusive jurisdiction in civil cases against any Native American in “Indian country”, including divorce and custody cases where the parties are both tribal members.[3]  Exclusive tribal jurisdiction has also been found to apply in cases where Native American children live in “Indian country” with a Native American parent, even regardless of the tribal member status of the non-custodial parent.[4]

Outside of “Indian country”, tribal courts may claim concurrent jurisdiction with state courts where tribal interests are at stake, such as when a case pertains to custody of a tribal member child.  The Indian Child Welfare Act (ICWA) is a federal law that explicitly gives tribes the right to intervene in any state court child welfare proceeding relating to custody of a Native American child whose parents are facing termination of their parental rights.  Absent good cause, state courts must grant petitions from the tribe or a Native American parent to transfer these proceedings to tribal court.  The rationale is clearly related to issues of tribal sovereignty and cultural and ethnic survival.

Concurrent jurisdiction can present complications, however.  It means that a case may be initiated in either state or tribal court, but this can lead litigants to “shop” for what they may perceive as a more favorable forum.  It can also lead to multiple, conflicting court orders on the same subject matter.  The Uniform Child Custody Jurisdiction and Enforcement Act (UCCJEA) was enacted to resolve issues of concurrent jurisdiction among state courts by establishing a child’s “home state” and giving that state exclusive jurisdiction to decide custody matters.  While Section 104 of the UCCJEA requires state courts to treat tribal court proceedings and tribal court custody orders as being on equal footing to those from other states, this is an optional part of the Act and has not been adopted by every state.  Tribal courts, for their part, are not bound by the U.S. Constitution to give “full faith and credit” to the judicial proceedings and orders of state courts the way the states must do for each other[5], so strictly speaking there is no requirement for reciprocity between state and tribal courts, except in specific matters established under federal law[6].  Tribal lawmakers and courts can, if they wish, extend their authority over tribal members (and Native American children) even when they reside outside of “Indian country”.  This would reflect a membership-based view of tribal sovereignty, but since it conflicts with the geography-based “home state” jurisdiction rules of the UCCJEA, the tribe would then lose reciprocal protections afforded to their own orders that the Act provides.

Essentially, tribes have to choose to either claim jurisdiction over Native American children outside of “Indian country”, or else protect their own (geographically limited) decisions with full faith and credit in state courts, but not both.[7]  In practice, tribes tend to choose the latter course and follow the legal principle of comity—whereby different legal jurisdictions give deference to each other out of friendship, as opposed to obligation.  So while the UCCJEA does not absolutely resolve conflicts of jurisdiction between state and tribal courts in child custody matters, it goes a certain way toward that goal.  Other comity-based factors that may be used to address what jurisdictional conflicts remain include the child’s assimilation into tribal life, the child’s relationship with each parent, and the parent’s ties to the tribe and length of residence on vs. off the reservation.[8]

[1] http://www.icctc.org/Tribal%20Courts.pdf Role of Indian Tribal Courts in the Justice System.

[6] Such as: protection orders from domestic violence, child support orders, and child custody orders in proceedings for abuse and neglect (under the Indian Child Welfare Act).  These orders are required by federal statute law to be given full faith and credit as between tribal, state, and federal courts. 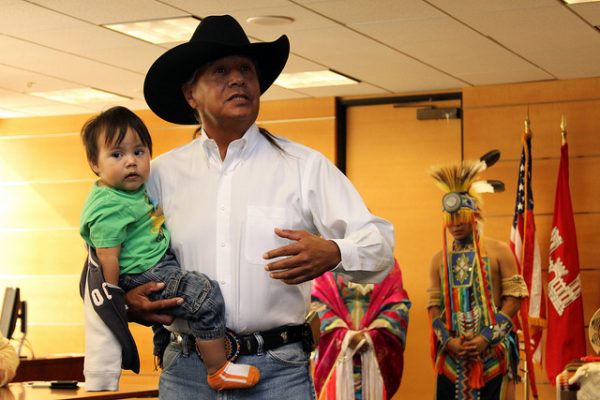