Young mom Cerissa called Child Find concerned that her sister, Wendy, was refusing to return her 2-year-old daughter to her.  Cerissa had given her daughter, Jordan, into Wendy’s care a year previously due to an unstable living situation, but now that Cerissa had a safe, stable environment for Jordan to return to, Wendy – who was living over 500 miles away – wouldn’t agree to it.

Wendy said that she remained concerned about Cerissa’s living situation and future plans.  Other family members were getting involved and telling Cerissa she’d “lost custody”.  At the same time, the advice lines Cerissa was calling were telling her this was a kidnapping situation and she had every right to law enforcement assistance in having her daughter returned.  Unsure what to believe, she contacted us.

We began by giving Cerissa guidance on how authorities define and deal with kidnapping or custodial interference, as well as the possible police response to a family abduction – often instigated simply to follow court orders or, where no orders exist, direct parties to take matters to civil court. Given the situation, it was entirely possible that Cerissa could be left with no option but to file in family court.

Distance From Both Sides

Communication between the sisters had largely broken down by this point. We learned that Cerissa had moved without informing Wendy. We warned Cerissa that without an address for notification, Wendy could file something at court concerning Jordan and Cerissa may not hear about it.  Additionally, Cerissa’s being out of contact could be used to support a claim that she had abandoned Jordan.  We explained to Cerissa how she could access information from court. For instance to check if Wendy could have already filed for custody or formal guardianship.

Cerissa was facing several other obstacles. She discovered Wendy had moved as well, after getting the police to do a welfare check and finding no one home. Her lack of resources and transportation also limited her options, even if she had known her sister’s location. 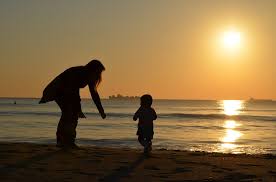 Thankfully, Cerissa remained in contact with her partner and Jordan’s father, Ricky, who was stationed abroad in the military. Though Ricky had never met his daughter or established legal rights, Cerissa kept him informed of the situation.  They planned to be a family together once he returned from overseas.  This, in fact, turned out to be a point of contention between Cerissa and Wendy – Wendy apparently believed Ricky should take a DNA test, and further wanted Cerissa and Ricky to show they were living in a “stable” situation before she would return Jordan.

After several weeks, Ricky returned and invited Cerissa to live with him and his mother. Things began to look up. Cerissa could now draw on additional resources – financial and otherwise – in the attempt to recover her daughter. Child Find provided legal referrals at this point, along with information that led them to successfully establish Ricky’s paternity.

With proof that Jordan was Ricky’s child, and her parents stable home life together, Wendy realized she would have a difficult time should the situation play out in the courts. She grew receptive to resuming productive communication with Cerissa – and consequently returned Jordan to the care of her mom and dad.